Whippet Temperament and Behavior with Kids, Cats and other Pets

Discover the whippet temperament and behavior with children, dogs of other breeds, cats and small pets.

Whippets and Other Dogs 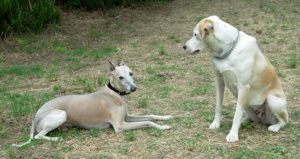 Whippets love to have company and are often friendly towards other dogs.

Probably if whippets could express their preferences, they would put at the top of their "favorite friends list" first loving humans, then other whippets, sighthounds and finally other dogs.

More often than not my whippets enjoy a good game of catch with other whippets and sighthounds, while their relationship with other breeds is less predictable.

They favor non dominant, easy going dogs. Especially my Zippo, as he likes to think himself the ruler of our canine world, won’t put up with any bossing and the encounter with dominant, rough mannered dogs often ends in a fight and a collection of assorted cuts and bruises for him.

Companions of the same sex are well accepted by some whippets but having two males in the same household was a rather bumpy ride for me.

My two male whippet dogs were very competitive especially about their positions on the sofa but funnily enough rarely fought about food.

They completely stopped fighting only after they were both neutered.

Adding a dog of the opposite sex to your household is the safest choice and probably the most easily accepted by your whippet. 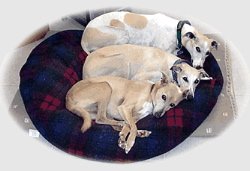 Introducing a new dog to the household requires patience and caution, a dog fight can be extremely dangerous and is to be carefully avoided.

Ideally, before the first meeting, the dogs will have been fed and exercised to put them in a relaxed and accepting state of mind.

Have the dogs meet and get acquainted under your supervision, on a neutral ground like a public park.

The ideal spot would be safely fenced and with enough space for them to run and play without getting too far away from you.

Give your dogs some time apart to rest and relax especially if your new dog is a puppy. A small crate that the bigger dog cannot enter can become a safe haven for the pup.

At the beginning don't feed your whippet dogs together, keep them separated by a gate or a glass door so they can see each other without the possibility to fight over the food.

Don't leave the dogs together and unsupervised until they have proven to be happy and confident in each other company.

Whippet Temperament and Behavior with Cats 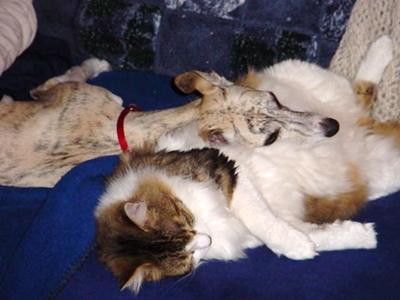 Whippets have a very strong prey instinct, this is what makes them such splendid racing dogs and hunters but it also makes them see small, furry animals as potential game.

I once caught my whippets gazing with a very intent and dangerous look at an unsuspecting lady wrapped in a gorgeous mink fur. You could tell they were asking themselves what kind of creature she was and if she was going to make a good catch.

Personally, I didn’t have any luck trying to mix whippets and cats but other whippeteers tell me that it is not necessarily so, especially when the dogs are raised with cats from the beginning.

Some whippets learn to respect the resident felines especially when they are introduced as a puppies to old and self confident cats, already living in the house.

My Lola, who was raised with huge Maine Coon cats, has learned to respect them (also because they are as big as her) and she actually enjoys their company especially in cold winter nights.

Nevertheless, when we encounter a cat during our walks she remembers her whippet temperament and pulls on the leash  prancing like a wild bronco.

To stop her from this annoying display of hunting instinct, when she sees a cat, I turn and take few steps in the opposite direction.

As soon as she calms down, we resume our walk.

If you think about adding a whippet to your household and you already have cats, look for a dog that has already proved himself to be cat proof.

In any case, the introduction of a new pet always calls for a good deal of caution to avoid accidents and irrevocable hard feelings between species.

Whippet Temperament and Behavior with Other Pets

I would definitely keep whippets away from rabbits, guinea pigs and hamsters, they look too much like a hound’s natural prey.

Really, you don't want to see a whippet in action on the wrong prey.

Given the occasion, our sweet pooches suddenly can turn into velociraptors extremely fast and efficient in killing their catch.

My kids appreciate the quiet and unobtrusive whippet temperament. In exchange the whippets gladly lend themselves to children's games.

During a long summer afternoon an unnatural silence descended on our house. When I went to check the cause of such a suspicious calm, I found my kids happily playing with my collection of dog collars and the whippets, their necks draped with a multitude of decorations, modeling the afternoon away. 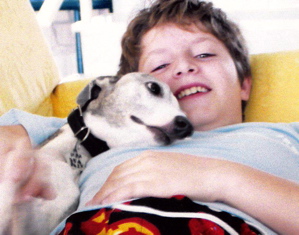 Whippets generally don’t enjoy repetitive games, they’ll retrieve your frisbee a few times and than will look for some other form of entrainment. If the game gets too rough they would rather withdrawa than react brusquely or snap at rough handling.

If you are looking for a dog that will fetch a ball one hundred times in a row, you better look for another breed.

But, on another hand whippets adore quiet games, the attention of children and the gentle touch of little fingers no matter how clumsy as long as they are loving.

The whippets' gentle temperament makes them one of the best breeds for kids once they are old enough to be considerate about the dog's needs.

Whippets are also a great dog breed for seniors for their moderate size, their calm behavior indoors and minimal grooming requirement.

The whippet is a great family dog, safe around children (given the normal precautions), an excellent jogging companion, a quite presence while you are at the computer and a great company for the grand parents.

There is also another side of the whippet temperament that should not be underestimated. A whippet is also a fantastic racing dog. Coursing and racing events can became a focus for the family, a great excuse for a family outing and a picnic.

More about Whippet Temperament and Personality