I am completely smitten!!

I re-homed Chester about a month ago from a friend whose circumstances are changing. She, in turn, had re-homed him from a pub. The original owner had kept him in a crate for a year. He had only been allowed out into the garden to poo etc and very rarely went for a walk. I am his third home in 18 months - since he was a puppy.

I had always had terriers at home and oriental cats since I left. So it was with some trepidation that I took on Chester. I have to make it work as he cannot be pushed from pillar to post.

The first two nights he was on a very comfortable bed in the kitchen. He howled, barked, scratched the door and I had no sleep for at all. I then was advised to get a crate. He could not come into my bedroom as my Burmese blue cat has taken up residence in there. I was reluctant but faced with a third sleepless night.....
I bought one and a very comfortable bed which cost a lot of money. He went in as good as gold (with the aid of treats). No more problems - good sleep. I came home a couple of days later to find him surrounded up to his neck in capoc, He had undone the zip fastener and pulled out the filling. He was not bored but was just having a tantrum as I had left him for one hour. He has got better now as he knows I will come back.

I take him out every day for an hour or so for a good run and also in the car to get him used to that which is a work in progress but he is getting better. My aim is to be able to take him with me most of the time.

He has been introduced to new friends (neighbours dogs) but my worry was that I work shifts and now am using dog walkers. He has a ball when they take him out. He has yet more new friends, human and dog and wonderful walks. They adore him and he them.

In one month, Chester has turned into a fantastic dog and will only get better!. He goes for a run each day and then sleeps on the sofa for the rest of the day. Apparently all sight hounds are incredibly lazy. He is almost self cleaning and very fastidious. He is amazing company and incredibly loving towards anyone who will scratch and tickle him. He loves people and dogs. There is not an aggressive bone in his body. I really could not have wished for a better dog.

Note: You have to make it very clear initially who is the boss in the household or a Whippet will run rings around you. They are highly intelligent dogs and very quickly will work out if you are a soft touch and take advantage of that. Having said that they are incredibly amenable and are very happy to please you.

However, training early is advisable. Nothing better than a well trained Whippet - an ongoing project! His recall is varied from very good to completely ignoring me. This depends on if there is another dog to play with or a bird that has to be chased (that is what they are there for!) He will come back but in "Whippet time" or if he remembers he might get a treat for being the well behaved dog. This is work in progress.

I have had Chester neutered as I am not going to breed from him and I am advised it can help avoid heath problems as they get older. He is chipped and now injected (unsure if they had ever been done) He has two coats and a fleece. Assorted collars and leads. He also has a harness which he walks very well on. He pulls like a train on a collar and lead. He has loads of toys including balls. We do play abandon with the ball. I will throw the ball and he abandons it - I threw it so I can get it!!

I have completely gone over the top and spent far too much money on accessories etc and some have been a waste of money so I would advise that work with the sighthound first to see what suits them. I have two safety clips in the car. He does not like a harness holding him firmly in the car but will accept two safety belts fastened onto his harness. He has two as he has a habit of standing on the safety belt button and accidentally releasing himself - hence two!

I am amazed if you are still reading this as I have rabbited on but I really am smitten with Chester.

Join in and write your own page! It's easy to do. How? Simply click here to return to Why a Whippet Dog?.

Check out my whippet art and gifts page! 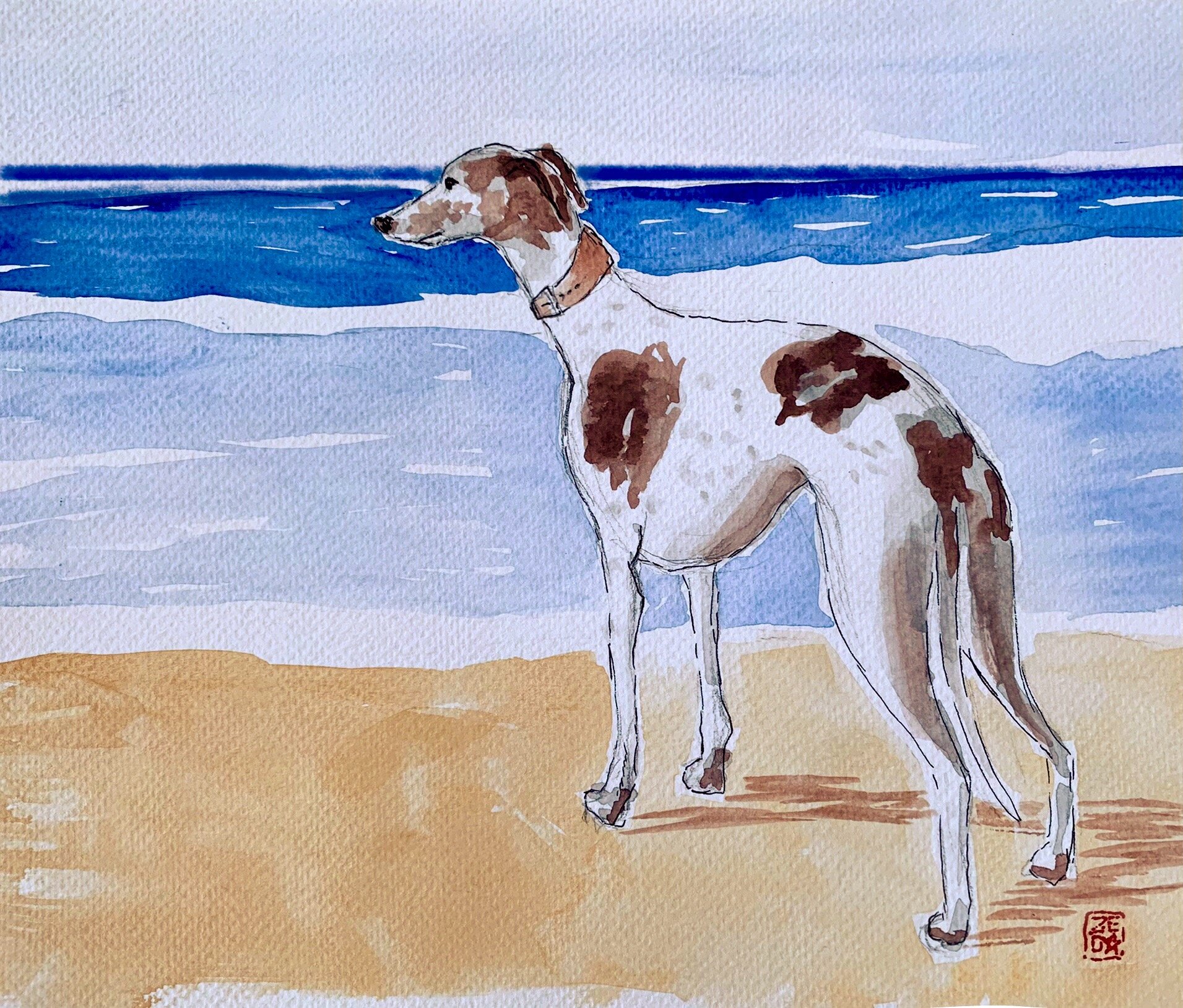