Discover the whippet history and the humble origins of this miraculously balanced dog breed.

The whippet is a valued member of the sighthound family of dogs.


These dogs hunt by sight more than by scent. Other breeds in this category are the Afghan Hound, the English and Italian Greyhound, the Borzoi, the Scottish Deerhound, the Spanish Galgo and other swift and elegant breed that have been used around the world to chase and take down prays of various size and strength.

The closest relatives to the whippet are the Italian and the English greyhound. Both these breeds share with the whippet the same svelte figure and the fine, silky coat.

The size influences the relative proportions of the dogs but doesn’t change the general look and function of this kind of hounds. 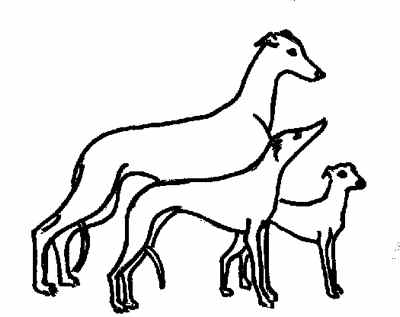 Regardless of the size, this general type of dog, an elegant and swift gazehound of short coat, has been around humans for thousands of years, helping them in the hunt, sharing their shelter and warming their beds and hearts.

This is testified by the innumerable depiction of hounds on vases, paintings and statues, sometimes as old as the beginning of human civilization.

From the beginning of the eighteenth century the whippet hound begins to appear in many famous paintings like the one by Jean Baptiste Oudry depicting two dogs belonging to the king Louis XV: Misse and Turlu. 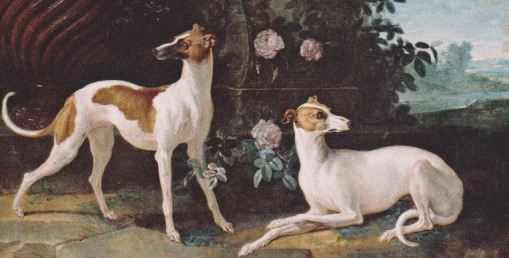 There are many theories about how whippet history began as a dog breed.

The only information on whippets upon which everybody agrees is that at the end of the nineteenth century the whippet or snap dog became popular among the working class of Northern England.

In fact the origins of the whippet, this middle sized and miraculously balanced dog, are not aristocratic.

These dogs were bred and wisely selected by the coal miners of North England. The whippets earned their keep (and sometimes more then their owner's wages) running in short races.

They were used for coursing rabbits in enclosures and later in rag races where the dogs were slipped at the end of a field to reach at fantastic speed their masters waiving a rag at the other end.

The whippet earned this way the title of “the poor man’s greyhound”.

Information on whippets report that in the genetic pool of the whippet was added terrier blood for gameness, Italian greyhound to reduce the size and English greyhound for speed and endurance.

The object of the breeding was to obtain maximum speed with the least possible size.

I think that the modest whippet’s origin is what makes such an adaptable dog, well suited to modern living conditions.

These hounds don’t require enormous amounts of food or exercise. Whippets take very little space in the house, are not obsessive barkers or diggers and are very easy to keep clean and tidy.

Their biggest requirement is the company of their owners. It is easy to imagine that right from the beginning they were prized pets, allowed to live in the house to shelter them from the severe cold of the Northern counties and the possibility of theft.

An often asked information on whippets is if they are delicate: well, they are not!

A selective breeding not based on color or looks but on function, preserved the breed from most genetic problems that plague many pure breed dogs.

The whippet history as an official dog breed doesn’t start long ago, it was recognized by the Kennel Club only in 1891.

Only then whippets began to be bred for their elegant look.

Nevertheless the whippet history and its original function of a hound able to catch his dinner, was never forgotten by breeders.

The integrity of the breed will be evident the first time you bring your show whippet to a coursing meeting, you’ll be amazed at the enthusiasm of your dog for the racing game.

Go back to Whippet Quirks

Back to Home Page